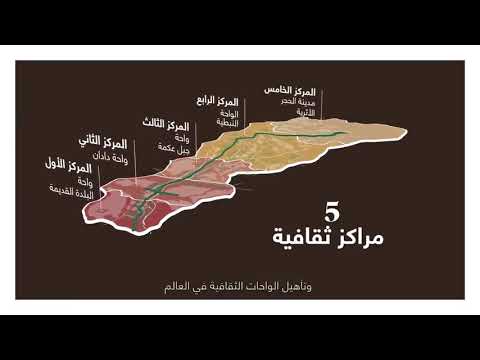 The patronage and direct supervision of His Highness the Crown Prince on launching the design vision of the “Journey Through Time” scheme within the AlUla development program reflected his high and continuous interest in highlighting the civilized face of the Kingdom globally, as His Highness realizes what it possesses of the ingredients and the capabilities it possesses that qualify it to continue its active and vital role in World Heritage Preservation Efforts.

His Highness’s launch of a journey through time carries 7 dazzling connotations at home and abroad, as the scheme includes the largest initiative to sustainably revive and rehabilitate cultural and natural oases in the world, and represent a model of the Kingdom’s commitment to preserving the cultural and natural heritage, as it will become a global model for sustainable, responsible and comprehensive development of the local community.

The plan is one of the basic stages in achieving the vision of AlUla launched by His Highness to make AlUla the largest living museum in the world, and aims to preserve AlUla as a unique natural and cultural environment that contributes to the development of a cultural heritage for the world, in order to achieve the goals of Vision 2030, and the development of the cultural area of ​​AlUla comes as a translation. A process for His Highness’ vision, which aims to enhance the cultural openness of the Kingdom to the countries of the world by transforming Al-Ula into a living museum and a global destination for arts, heritage, culture and nature, as it comes within the framework of efforts to diversify the sources of the economy and improve the quality of life.

The adoption of the Royal Commission for Al-Ula Governorate to establish the Kingdoms Institute as a global center for studies of civilizations that inhabited the northwestern Arabian Peninsula for thousands of years, embodies the Kingdom’s relentless pursuit of preserving the human history of the peoples and civilizations that settled in the region, sensing the importance of this in enriching the historical, cultural and civilizational movement in the region. And the world, while the Al-Ula Development Program will contribute to providing 38,000 jobs for the people and residents of Al-Ula over the next 15 years, and it will become a global model for sustainable, responsible and inclusive development for the local community, through more than 100 projects that will be built along 20 kilometers, and includes 5 centers and main neighborhoods and 15 cultural facilities. And naturally.

7 pivotal implications of the scheme