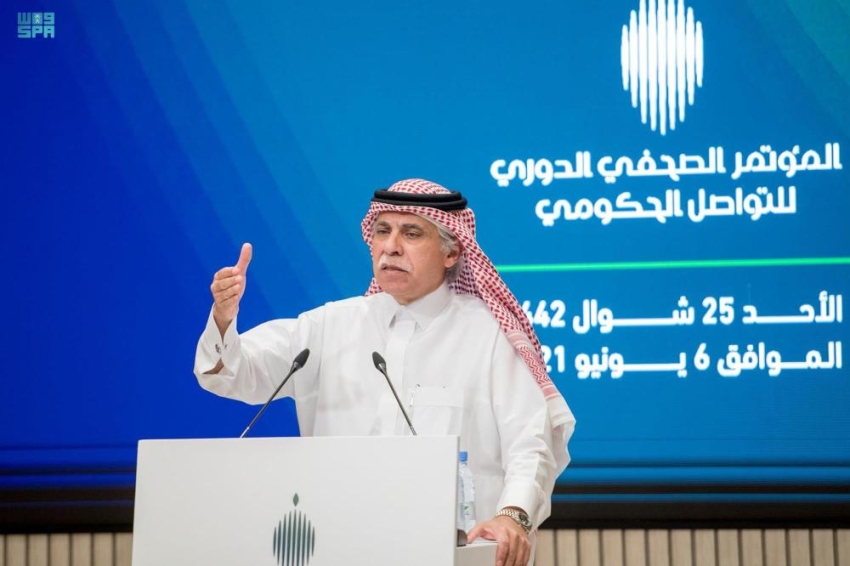 The Minister of Information in charge explained that the Kingdom is at the forefront of the world in terms of providing vaccines and has contracted more than twice the number of doses of the vaccine, as the proportion of those who received the vaccine today reached 40% of the population, which is equivalent to 15 million doses so far.

This came during the periodic press conference for government communication in its fourth edition, which was held in Riyadh today, with the participation of Prince Abdulaziz bin Turki Al-Faisal, Minister of Sports, and Minister of Information in charge, Dr. Majid Al-Qasabi.

Al-Qasabi said: “Today we are proud to reap the harvest of the Kingdom’s Vision 2030, which we celebrated yesterday, the fifth anniversary of its launch, during which we achieved many achievements at all levels, and that – by the grace of God – and then with the support of the Custodian of the Two Holy Mosques King Salman bin Abdulaziz Al Saud, and the leadership of the vision engineer and its godfather, His Highness. The Crown Prince – may God protect them.

Al-Qasabi pointed out that the Kingdom achieved today the first place in the world in the government’s response to the Corona pandemic, as well as the first place in the entrepreneurs’ response to the Corona pandemic, and indicated that the Kingdom has achieved today the first place at the level of the countries of the Middle East and North Africa and advanced centers globally among 167 countries in indicators of concern for the environment In conjunction with the World Day.

He extended his thanks and appreciation to all citizens who donated their organs to the organ donation program, led by the Custodian of the Two Holy Mosques and His Highness the Crown Prince – may God protect them – and to the citizens who brought pleasure to one million and 800 thousand beneficiaries within the Ihsan platform, through which donations exceeded more than 800 million riyals until right Now.

His Excellency indicated that 97% of the operating team in the Sakaka solar power plant project, which was launched by His Highness the Crown Prince – may God protect him – are young Saudi men and women, and the Dumat Al-Jandal wind power plant project with a capacity of 400 megawatts will be launched in Al-Jawf region.

He noted the open museum “Al-Ula, a journey through time”, the project launched by His Highness the Crown Prince and aims to revitalize and rehabilitate the main archaeological area in the Al-Ula Governorate in a sustainable manner, within 3 main phases, the first of which ends at the end of 2023.

On the Arab level, Dr. Al-Qasabi affirmed the Kingdom’s firm position towards the Palestinian cause and the rights of the brotherly Palestinian people, pointing out that the Custodian of the Two Holy Mosques – may God protect him – stressed during his call with President Mahmoud Abbas the Kingdom’s condemnation and condemnation of the Israeli attacks and measures in the city of Jerusalem, and the Israeli aggression on the Gaza Strip.

On the international level, His Excellency expressed his pride in the national and international achievement represented by the United Nations’ adoption of the Riyadh Anti-Corruption Initiative, which includes the establishment of a global network of anti-corruption law enforcement authorities, and a global electronic platform for exchanging information and experiences between 186 countries under the umbrella of the United Nations. He considered the initiative a global precedent that confirms The leading role of the Kingdom in combating corruption.

With regard to laying the foundations for security and stability, conflict resolution and combating terrorism in the neighboring African continent, which includes 54 countries, and whose population exceeds one billion and 200 million people, Dr. Al-Qasabi stated that His Highness the Crown Prince stressed during his speech at the Paris Summit the leading role of the Kingdom in advancing the development wheel in the countries of the continent. Africa and promote investment in it.