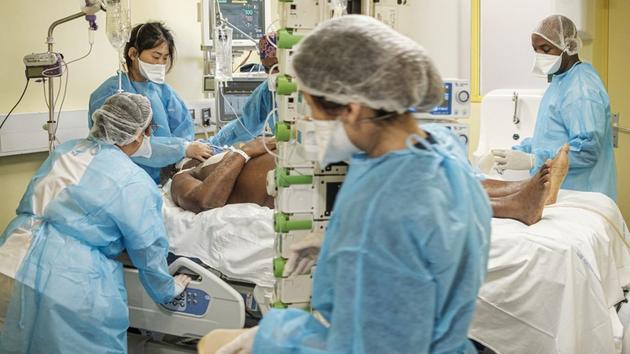 DECRYPTION – All specialists agree that the risks are not, however, comparable with the situation in recent months.

The epidemic resumption that began ten days ago is being confirmed throughout the country. The national incidence rate has exceeded the alert threshold of 50 cases per 100,000 inhabitants over one week. Every day, around 5,500 people are positive for Covid-19 (calculated on an average of 7 sliding days).

They were less than 4,700 just a week ago, an increase of 17%. This recovery is starting to be felt in the healthcare system, even if saturation levels are still very far away. Some 224 people are hospitalized every day compared to 200 a week ago. Around 1,050 people are currently being cared for in an intensive care unit and 59 people are admitted there every day, up from 43 a week ago.

“There is undoubtedly a gap between the levels of incidence and the real situation, warns Mircea Sofonea, lecturer in epidemiology and evolution of infectious diseases at the University of Montpellier. The end of free testing has changed behavior and undoubtedly disrupts the indicators. For the first time, the R, which measures the rate of transmission of the virus, is greater when calculated from hospitalizations (1.1) than when calculated from incidence data (1.08) . “ In other words, the number of new daily admissions is increasing a little faster than the number of new cases.

The dynamics are fairly homogeneous in the different age groups, even if the young adults are slightly more contaminated. The incidence rate reached 70 cases per 100,000 among 30-39 year olds on October 23, compared to 49 for those over 70 years old. On the other hand, there are differences depending on the territory. The Pays de la Loire appear to be affected by a faster recovery than the rest of the country (see infographic below) “You have to be careful of these magnifying glass effects, Mircea Sofonea analysis. We start from a very weak virus circulation, and locally a cluster can give a false impression of strong recovery. This was the case with Lozère a few weeks ago. But for the moment, the pace of the recovery seems fairly measured, particularly in the most densely populated areas, and is in line with forecasts. “

This rebound was indeed predicted by epidemiologists, it is even later than most of the scenarios had suggested. “The health pass has played a more important role than expected in slowing the circulation of the virus since the start of the school year, judge Mircea Sofonea. But with the fall, there is more contact in closed places, and this brake is no longer sufficient to reduce contamination. However, it is possible that the All Saints’ Day holidays will slow down this recovery. ”

Read alsoCovid vaccines: what is the third dose for?

For the rest, it is quite difficult to predict what the epidemic will give, but all specialists agree that the risks are no longer comparable with what we have experienced in recent months.. “Vaccination coverage and natural immunization of a large part of the population should continue to slow down the virus,” says Mircea Sofonea. It now seems certain that the virus will become endemic. However, we must remain vigilant, because if the R were to rise again above 1.2, we could find ourselves in very complicated situations around the month of December in hospitals. ”