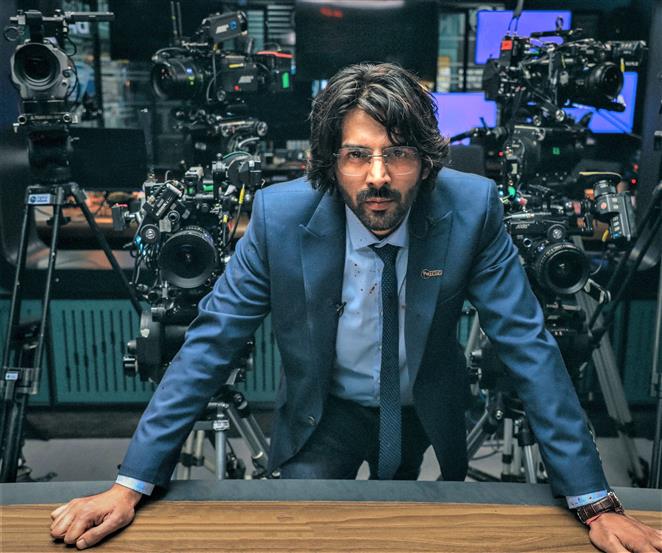 “I am Arjun Pathak from Bharosa News 24/7, whatever I am going to say is just the truth and truth and truth…” Does that offer you a sneak peek into how truth is manipulated in this industry? If not, later in the film when he says ‘Par yeh sach nahi hai…’ the sardonic reply of his boss, ‘But this is news’, says it all.

In one of the key scenes this exchange and more ‘we don’t report news, we sell news’ between a television anchor and head of news channel is certainly a reflection of the sorry times that journalism, especially television journalism is passing through. But Dhamaka, which takes us right into the explosive center of a television studio, could have been a more insight into the murky happenings of television and TRPs. Alas, it turns out to be more of a teaser. In the hands of Ram Madhvani, an award-winning director who gave us nail-biting Neerja and more recently Aarya, we certainly expect a high on adrenaline thrilling ride. And Dhamaka begins well. Pathak receives a call from a terrorist about to blow off a sea link. Cleary a scoop on hand and who would let go off the temptation of (mis)using such a big piece of information, especially since the threat is no empty one.

As terror goes live, in this remake of the 2014 South Korean film The Terror Live, we learn of the unscrupulous games that not only politicians but also media houses play. No surprises really, anything to up the TRP… Are we not already aware of the manoeuvrings of anchors who go hoarse selling us their brand of patriotism? And here we become privy to an unethical world where TV anchor Pathak, the dashing Kartik Aaryan is as much a hero as a villain, as much an accused as a victim.

Why has the terror mastermind called him out of all the stereotypes? There are many a skeleton in Pathak’s cupboard, which we would have been delighted to watch unfurl.

But since much of the action is happening in the newsroom, we hear more and see less. And what we see too seems to lack credibility. Ground zero where terror has struck… it could have been the zone which could have raised our hackles and given us goosebumps and kept us on tenterhooks. But here we are trying to understand why our security forces couldn’t reach the place where a journalist (Mrunal Thakur in a guest appearance), also Pathak’s estranged wife, is valiantly playing a heroine and good Samaritan. And guess what the anti-terror squad official is busy visiting—the TV channel office, offering advice on how to negotiate with the terrorist. But in effect he is taking cues from a television anchor, who refuses to toe the line his channel has decided to take.

Even then the cat and mouse game could have upped our engagement quotient. The terrorist demanding apology from the home minister and the government buying time to track him does not develop into a face off, we desire. When the voice of the terror mastermind acquires a body and a face, it once again is no earth-shaking moment even though buildings are crumbling. The narrative that seems to have all the gravity and sincerity of purpose otherwise does not culminate into a nail-biting climax. Rather it snowballs into a disjointed and unsatisfactory finale. Despite a credible performance by Kartik, his predicament fails to stir.

Amruta Subhash appears more flustered than the self-serving boss she is meant to be. The denouement is perhaps more metaphorical than real, symbolic of the rot that has set in taking away our bharosa in those who profess to espouse truth. Should you repose faith in this story that is real and unreal streaming on Netflix? Well, if you think poetic justice is integral to a movie plot which must end on an inspirational note, Dhamaka won’t make you happy. In fact, even if you are a stickler for quirkiness of characters and unorthodox endings, this Dhamaka isn’t the volatile mixture you can root for.