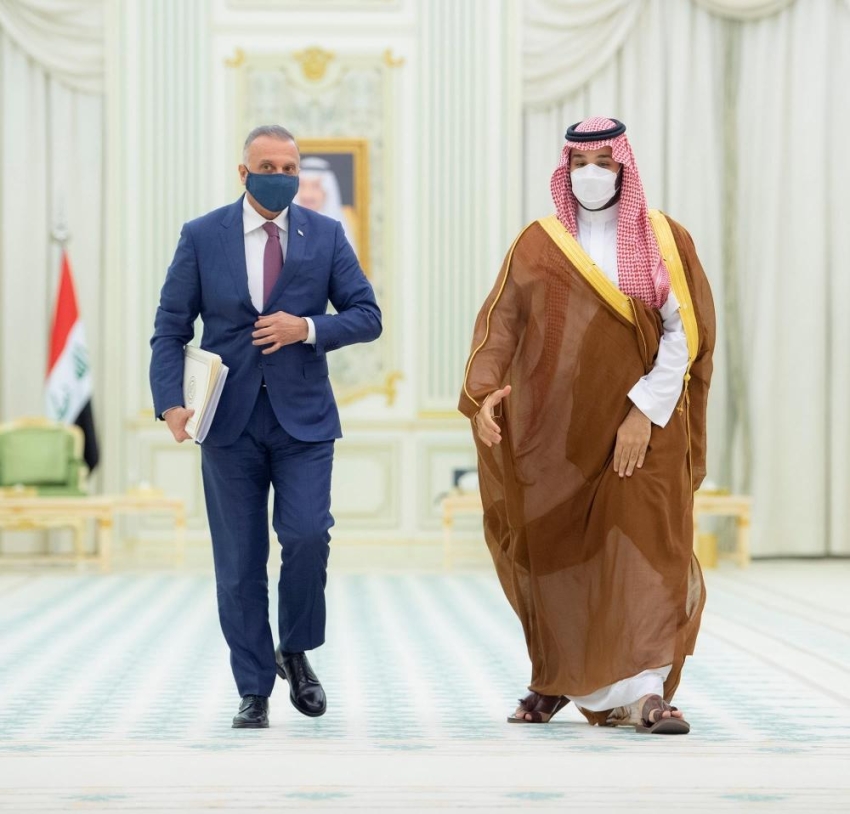 His Royal Highness Prince Mohammed bin Salman bin Abdulaziz, Crown Prince, Deputy Prime Minister and Minister of Defense, and His Excellency Mustafa Al-Kazemi, Prime Minister of the Republic of Iraq, at the Royal Court at Al-Yamamah Palace in Riyadh, today, a session of official talksA joint statement was issued as follows:

Based on the brotherly and historical ties and ties between the Kingdom of Saudi Arabia and the Republic of Iraq and their brotherly peoples, and a desire to develop relations on solid foundations and principles, foremost among which are Arab and Islamic brotherhood, good neighborliness and common interests, and in response to a generous invitation from the Custodian of the Two Holy Mosques King Salman bin Abdulaziz Al Saud, King of the Kingdom Saudi Arab; His Excellency Mr. Mustafa Al-Kazemi, Prime Minister of the Republic of Iraq, visited the Kingdom of Saudi Arabia on Shaban 18, 1424 AH, corresponding to March 31, 2012 AD.

A session of talks was held between His Royal Highness Prince Muhammad bin Salman bin Abdulaziz Al Saud, Crown Prince, Deputy Prime Minister and Minister of Defense, and Mr. Mustafa Al-Kazemi, Prime Minister of the Republic of Iraq, which dealt with prospects for bilateral cooperation between the two brotherly countries and ways to enhance them in all fields. Exchange of views on issues and issues of concern to the two countries on the regional and international arenas, in a way that contributes to supporting and enhancing security and stability in the region and the world.

The two sides praised the results of the meeting that took place between the Custodian of the Two Holy Mosques and the Prime Minister of the Republic of Iraq – via visual communication – on 12 Shaaban 1442 AH, and the two sides emphasized the importance of what was discussed and understanding on it during that meeting, especially with regard to strengthening relations between the Kingdom and Iraq and strengthening the work of the Council Saudi-Iraqi coordination.

They expressed their satisfaction with the level of cooperation and coordination between the two brotherly countries, stressing their determination to continue and deepen aspects of cooperation and coordination between them in a way that serves common interests in various fields, especially political, security, military, commercial, investment, cultural and tourism, praising the achievements of the Iraqi-Saudi Coordination Council and the agreements and memoranda of understanding that emerged from it, and the importance of Urging the ministries and relevant authorities on both sides to follow up and activate aspects of cooperation in order to allow optimal investment for all available capabilities and opportunities to enhance integration between the two countries, solidarity in facing common challenges, and build on the previously achieved positive results in the mutual visits between officials of the two countries during the past period.

On the level of bilateral relations, the two sides affirmed their keenness on bilateral cooperation in various fields, activating the agreements and memoranda of understanding reached between the two countries, and urged the ministries and relevant authorities in the two countries to make more efforts. To ensure the speedy completion and implementation of these agreements.

They also stressed the continuation of joint cooperation and coordination in confronting the threat of extremism and terrorism as a threat to the countries of the region and the world. Through the exchange of experiences and experiences between the competent security authorities and centers in the two countries, and they agreed to continue to support the efforts of Iraq in cooperation with the International Coalition to address the remnants of the terrorist organization ISIS, and the two sides emphasized the importance of joint cooperation in securing the safety of the borders between the two countries.

The two sides agreed on the following:

Establishing a joint Saudi-Iraqi fund, the capital of which is estimated at three billion dollars, as a contribution from the Kingdom of Saudi Arabia in promoting investment in economic fields in the Republic of Iraq for the benefit of the Saudi and Iraqi economies, with the participation of the private sector on both sides.

Cooperation in the fields of energy and renewable energy and activating and accelerating the joint action plan, under the umbrella of the Saudi-Iraqi Coordination Council, with the need to continue cooperation and coordination of positions in the petroleum field, within the scope of work of the Organization of Petroleum Exporting Countries (OPEC) and the (OPEC +) agreement, with full commitment According to the requirements of the agreement, the compensation mechanism, and all the decisions that have been agreed upon, in a way that guarantees the stability of the global oil markets.

– The completion of the electrical interconnection project, due to its importance for the two countries.

– Enhancing coordination in the field of mutual support and support within the framework of multilateral diplomacy.

Enhancing investment opportunities for Saudi companies and calling for them to expand their activities in Iraq and in various fields and in reconstruction efforts.

The Republic of Iraq appreciated the participation of the Kingdom of Saudi Arabia in the Kuwait Conference for the Reconstruction of Iraq, which was held during the period from 12 to 14 February 2018, and its pledges and contributions to it. It was agreed to coordinate between the two sides to agree on the means and aspects of the aforementioned support.

She also appreciated the initiatives provided by the Kingdom of Saudi Arabia to the Republic of Iraq in the field of confronting the Corona pandemic (Covid-19).

The Republic of Iraq commended the announcement by His Royal Highness Prince Muhammad bin Salman bin Abdulaziz Al Saud, Crown Prince, Deputy Prime Minister and Minister of Defense, of the Saudi Green Initiative and the Green Middle East Initiative, which will be launched soon, which expresses the Kingdom and the region’s direction to protect the land and nature in order to achieve global goals. With an emphasis on working with the Kingdom for everything that achieves these initiatives and their goals.

Bilateral agreements were signed that included:

An agreement to avoid double taxation

Two memoranda of understanding and cooperation were signed, including:

On the level of regional issues, the two sides agreed to intensify cooperation, coordination and exchange of views on issues and issues of concern to the two countries on the regional and international arenas, in a way that contributes to supporting and strengthening security and stability in the region, and the need to keep them away from tensions and their causes, and the joint endeavor to establish the foundations of sustainable security and stability.

The two sides stressed the security, safety and stability of the region, and urged all neighboring countries to adhere to the principles of good neighborliness, common interests and non-interference in the internal affairs of countries.

In this context, the Iraqi Prime Minister affirmed his support for the initiative of the Kingdom of Saudi Arabia to end the crisis in Yemen. The Iraqi Prime Minister expressed his thanks and appreciation to the Custodian of the Two Holy Mosques King Salman bin Abdulaziz Al Saud, to His Royal Highness Prince Muhammad bin Salman bin Abdulaziz, Crown Prince, Deputy Prime Minister and Minister of Defense, and to the Kingdom’s government for the warm reception and hospitality accorded to him and the accompanying delegation.