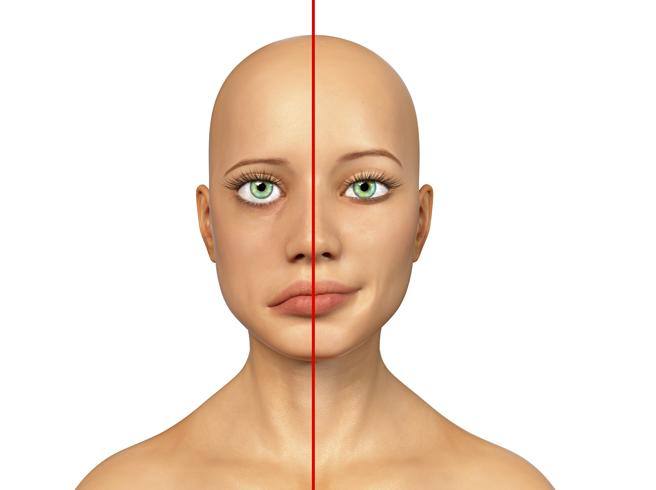 Sudden facial paralysis can only be frightening. One immediately thinks of a stroke or some other serious ailment, but fortunately often the cause is much less worrying. The most common, and even less dangerous, form of facial paralysis is the so-called Bell’s palsy, which affects only one side of the face and resolves completely in 75 percent of cases.

Bell’s palsy caused byinflammation of the facial nerve at the level of the most delicate point of his journey: the passage behind the ear, where the smallest space – he explains Massimo Filippi, director of the Neurology Unit at the Irccs San Raffaele Hospital and Professor of Neurology at the San Raffaele Vita-Salute University of Milan -. Here this cranial nerve passes through a bone canal. In case of inflammation, the nerve can thicken and become compressed, thus blocking the transmission of nerve signals to the muscles of the face innervated by it. The result is paralysis of half of the face. In most cases, idiopathic Bell’s palsy: it is not possible to trace a clear cause, even if it is thought that in the young they may play a infections, while diseases such as diabetes. Only in 1 percent of cases, paralysis secondary to other conditions, such as tumors, aneurysms or inflammatory diseases.

How does it manifest itself?

One corner of the mouth yields downward, the lower eyelid relaxes, the eye cannot be closed and the forehead relaxed. These are the main alarm bells that strictly affect only half of the face. The sudden onset and the peak typically occurs within five days. These signs are usually also accompanied by a ‘excessive or reduced tearing, depending on where the nerve is inflamed, a feeling of discomfort associated with the acoustic stimulus (hyperacusis) and loss of taste in the front of the tongue. The involvement of both the eye and the mouth helps distinguish this peripheral paresis from the central forms, for example due to stroke, that they concern only the lower part of the face however, they are accompanied by other typical neurological symptoms. The nerve signal that reaches the facial muscles originates from the contralateral cerebral cortex. When there is a lesion of the central nervous system, as in the case of a stroke, the subjects present only a deviation of the lip line, while the motility of the eye and forehead remains preserved. In such cases, only the lower facial muscles are paralyzed, contralateral to the brain injury

How should you behave?

Usually the patient, traumatized after looking in the mirror, goes immediately to the emergency room. Careful observation of the face immediately makes it possible to understand that it is a peripheral paralysis. The next step is to exclude that it was caused by major pathologies (aneurysm, tumor). For this purpose, surveys such as MRI or CT scan. Once it is ascertained that the paralysis does not hide serious problems, it is necessary to reassure the patient and start treatment immediately.

How can it be cured?

Therapy is based on administration of cortisone to disinfect the nerve and prevent it from “swelling” further, making the situation worse. Also to protect the cornea, the eye is closed with gauze. Typically the patient begins to recover after a few weeks and within three months in 75 percent of cases there is a complete recovery. Some factors are indicative of greater chances of recovery, including partial paralysis, young age, normal salivation and taste, rapid recovery and the presence of muscle activity evoked with electromyography (to be performed one week after the onset of symptoms).

What are the complications?

Bell’s palsy can also carry some risks, fortunately rare. These include aberrant reinnervation and the appearance of facial hemispasms. During the healing process, the facial nerve can form abnormal connections and give rise to unexpected movements of the facial muscles, for example involuntary closing of the eye following movements of the lips or mouth. Similarly, you can have it profuse tearing while eating, a phenomenon that occurs if the nerve fibers originally connected with the facial muscles innervate the salivary glands. After healing, some individuals may also experience involuntary contractions (spasthma) of the facial musculature. Filippi explains.