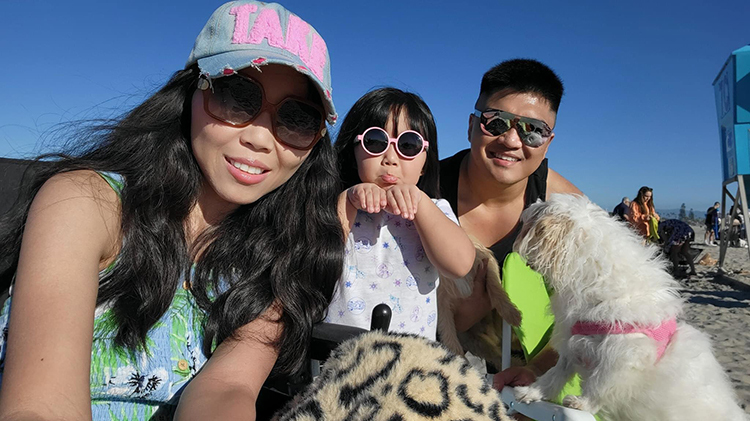 AmericaUnable to walk due to complications from a strange illness, Hiep Pho hoped her husband would find a new happiness, but he was always with her as promised when he got married.

“I promise to always love you, in rich and difficult times, in sickness and in health…”, Ngo Minh Vuong promised his wife at their wedding, eight years ago.

In 2017, his wife, Nguyen Ngo Hiep Pho (36 years old), suddenly had severe pain in her leg. After a week in hospital, she was completely paralyzed and was diagnosed with Sensory gangslionopathy, an extremely rare type of ganglion disease, only four cases were recorded worldwide. For the next four months, Hiep Pho had to stay in the intensive care unit. The pain that tormented her body 24/24 made all her activities, even the simplest such as going to the toilet by herself, sitting up to eat, also became difficult.

Vuong is serving in the navy and has to take two years off to take care of his wife. At this time, their daughter is only 4 months old.

No matter what you do, you no longer have the ability to be “a husband and wife”, Pho often tiredly advised Vuong to get another wife. In the computer, she also drafted a divorce petition, just waiting to be printed and signed. “If you leave, I won’t blame you,” she shared.

Being urged by his wife to marry someone else, at first, Vuong just laughed. Until he saw Pho mentioned too many times, he shook his head: “Why is that possible. Life must be worthy of your conscience”.

Vuong and Pho knew each other 17 years ago, when she was a freshman, a sophomore, living near each other in San Francisco.

During college, Vuong had a two-year internship at the hospital emergency department, witnessed many births and deaths, so he did not want to continue his medical career. After getting married in June 2011, he decided to join the US Navy. However, Vuong had to be far away from home, only to reunite on weekends. Every Friday afternoon, he drove 800 km from his base in San Diego to San Francisco, and on Sunday returned to his unit.

Being far from her husband, Pho does not want to have children. In 2013, her father died, followed by her brother. The continuous events left her mother in severe shock, sad all day. Her sister advised Pho to give birth to a child to help her feel less sad. In 2016, baby Lexy was born, the couple’s house was bustling with children’s voices.

But the challenge came to that small family. From the day he contracted a strange disease, Pho was almost a vegetative, although he was still aware of everything around him. In the room of dozens of patients, only Vuong stayed to take care of his wife. He competed for the nurse’s job, showering and cleaning for her by himself. When the meal came, he took each piece and cuddled his wife like a child so that she could eat more. Every day, Mr. Vuong just hangs around with his wife, too tired to sit on a chair, face down on the bed, and fall asleep.

“The most painful thing is when the street is in danger, the son-in-law just sits by the bed, holding his wife’s hand, crying, whispering that he hopes his wife will try to overcome so that the family can reunite,” said Mrs. Ngo Thi Det, Pho’s mother.

Street had to be hospitalized continuously. She spends three weeks in the hospital every month. There was a time when I got home 2-3 hours later and had to go to the emergency room because of vomiting or fainting, continuously for three years. When she regained consciousness, one day it was too painful, and Pho asked her husband to die. Listening to his wife say, Vuong just silently held her hand, shedding tears. Seeing her husband crying, Pho turned away, saying nothing, fearing that he would hurt more. By 2020, the hospital had the first Covid-19 case, so the doctor advised her to go home to recuperate.

After two years at home, Wang went back to work. To be able to work and take care of his wife, he rented a house in San Diego, near where he worked. Even Mrs. Det also moved to support her daughter and her husband to take care of their children. Despite having a mother-in-law, Vuong still washes his wife’s hygiene every day, helps with physical therapy, helps her practice walking or holds things. With her husband’s patience, Pho was able to hold a spoon to eat rice, sit up on her own without help, but still could not walk.

Chronic illness makes it impossible for a mother to be with her daughter and watch her grow up day by day. Whenever Pho came home from the hospital, little Lexy thought of a stranger, fussed, and even waved her hand when she approached. Having to lie in bed, Pho felt lonely, wanted to write a diary, but could not hold a pen.

At this time, Vuong suggested that his wife do YouTube. “Since the day I filmed the video, when I was asked by friends, relatives, even strangers, my spirit has improved,” Pho said. Although it takes two minutes to shoot each time, it takes 4-5 days to complete a video, but so far she has dozens of videos about daily life. “Having work to do, I feel that I am also a useful person,” she confided.

Recently, Vuong found a new therapist for his wife. To encourage her to practice, he often told about the beautiful moments of the couple in the past, when Pho was still healthy. “I will try with you. You will definitely return to the way you were before,” the husband said every day.

“You always give me faith to live. Thanks to you, I will never give up.” Pho said and believed that Vuong was by her side, and one day she would be able to stand on her own two feet.

“The first thing I do is come to him, to be held by him,” she said.