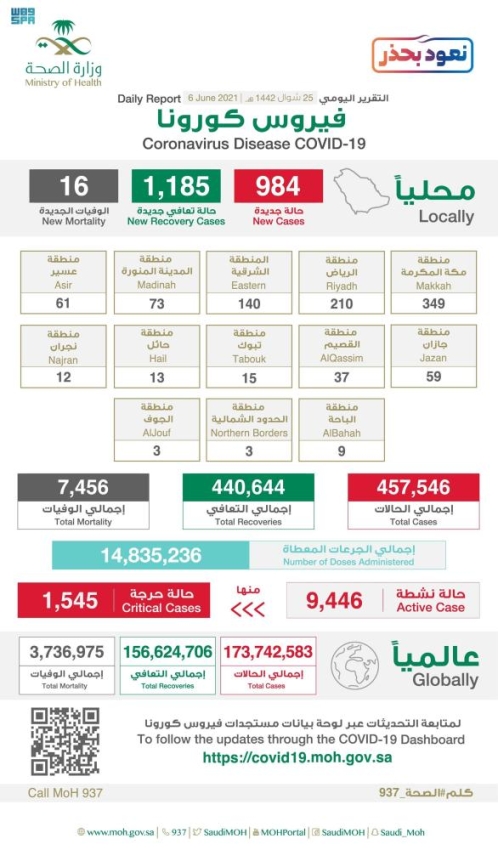 The official spokesman of the Ministry of Health, Dr. Muhammad Al-Abdali, confirmed that societal awareness contributed to the decrease in the curve of infections with the Corona virus, urging continued commitment to reach positive trends by taking the vaccine, and commitment to applying precautionary measures, noting that infection with the Corona virus is dangerous and not as rumored.

Al-Abdali stressed during the press conference that he held today, that vaccines are highly safe and the hesitation in taking them is a dangerous matter, indicating that the demand for taking the vaccine around the world is constantly increasing, as the number of those who received the vaccine reached more than two billion people. He stressed the importance of maintaining a safe distance during events and meetings, noting that the vaccine reduces the chances of infection, as well as limits severe disease.

The spokesperson for the Ministry of Health announced the registration of 984 new cases of the new Corona virus (COVID-19), bringing the total number of confirmed cases in the Kingdom to (457546) cases, including (9446) active cases that are still receiving medical care, and most of them are in reassuring health, including (1545). ) a critical condition, indicating that the number of people recovered in the Kingdom reached (44,0644) by adding (1185) new cases of recovery, and the number of deaths reached (7456), adding (16) new deaths.