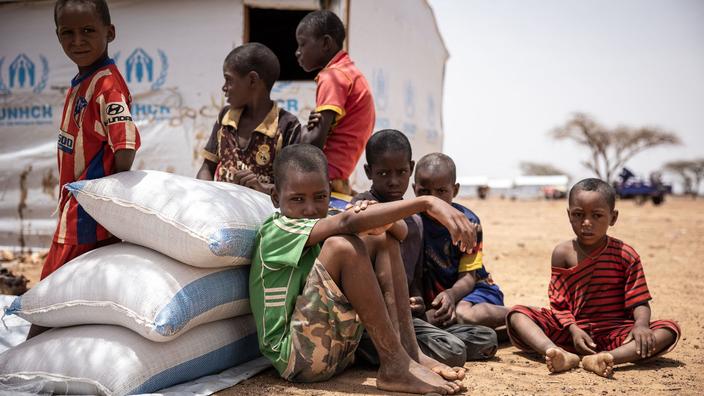 The UN is alarmed by a record delay in immunization against childhood diseases around the world. The health, but also the education and safety of the youngest, have been relegated to the background by the Coronavirus pandemic.

“Let’s not allow children to be the hidden victims of the COVID-19 pandemic“, Warned Unicef ​​in the spring of 2020. While all eyes were on the pandemic, the UN agency devoted to children was alarmed by”hidden effects of the crisis»On the little ones. A year and a half later, the time has come to take stock, and the finding is worrying. On Thursday, a UN report revealed that 23 million children have not received the three doses of the vaccine against diphtheria, tetanus and whooping cough around the world, a figure that had not been reached since 2009. “This delay in the protection of diseases outside Covid is symptomatic, but it is only one effect among many others that we are seeing in the field», Says Julien Beauhaire, spokesperson for the NGO Plan international, which works with children in 55 countries around the world. “Health restrictions have been devastating for poor countries, and children have been among the first to pay the price“.

Read also :How the Covid-19 has changed humanitarian aid around the world

So far, the virus has relatively spared children and adolescents. While they constitute nearly 30% of the world’s population, those under 18 accounted for only 8% of global Covid-19 cases. But faced with the unpredictability of the virus, and apprehending a surge in poor countries, international aid associations and NGOs have massively readjusted their programs in the spring of 2020. “We have sent for several hundred thousand euros of gowns, masks and even respirators to Senegal, Burkina Faso or Afghanistan», Explains Alexis Ponel, program manager for the Chaîne de l’Espoir, an organization specializing in surgical care for children. “Meanwhile, all of our actions have been put on hold. In several countries, our medico-surgical units have been fully requisitioned to accommodate Covid-19 cases. Our beds were occupied by elderly, weak or overweight people; the children were the big absent», Relates the manager.

Deprived of school, “much more than stopping learning”

For the youngest however, Unicef ​​is categorical: the consequences of the pandemic “will pay in death», Alerted the organization on July 15. Starting with countries where containment measures have been particularly drastic, such as Laos, where containment still remains in force despite a very low rate of four deaths from the Coronavirus. “In these countries with informal economic systems, health restrictions have had a direct impact on families, deprived of travel and work, and therefore of any source of income.», Explains Antoine Besson, editor in chief of Asia Reportages, the magazine of Enfants du Mékong. “This had chain consequences: parents found themselves without a job, children without meals.“.

Faced with the explosion of undernutrition, Unicef ​​has planned to provide assistance to 190 million children in emergency situations for the year 2021 alone. A situation that the closure of schools has not made than accentuate. “For the most vulnerable, school is much more than the end of school learning. It’s at least one good meal a day guaranteed, but it’s also a living environment», Explains to Figaro Adrien Sallez, Director General of the Sister Emmanuelle Association (Asmae). In South Sudan, an additional 2 million children have been deprived of school for 14 consecutive months. The Philippines, which has experienced the longest lockdown in the world with a 15-month lockdown, still practices distance education today.

In these countries, organizations are worried about an unprecedented dropout rate. “The confinement will have been fatal for many children who took part in the work of the house, made themselves useful at the home, and whose families do not necessarily envisage a return to school.», Explains the director of Asmae. An observation shared by the NGO Enfants du Mékong: “After more than a year of absence, regaining learning habits will be very difficult“, Worries Antoine Besson.

Health crisis for the world, the Covid-19 is also a “mental health crisisFor the youngest, warned the UN in a press release on July 11. By disrupting their daily lives, the virus will have “amplified“The already visible addiction trends on the net, according to the international organization, and”aggravated the risks child sexual exploitation, violence and abuse“. “Promiscuity undoubtedly favors the increase in violence», Supports Antoine Besson, editor-in-chief for Enfants du Mékong, whose godchildren have been confronted in recent months with difficult situations in their homes. “Vdrunk on top of each other between four walls and a tin roof easily breeds family drama, violence and abuse.“

Read also :“I was thrown out overnight”: the majority, anguish of children in care

In its global program of action “intended to protect the most vulnerable children from the impact of the coronavirus“, Unicef ​​has set itself the goal of connecting 3.5 million children and young people to the Internet by 2030, so that they can”study online“. If he deems it necessary, Antoine Besson warns, however, against the misdeeds of the internet. “In Cambodia and Laos, many penniless families go into debt to get a smartphone“. The humanitarian explains having observed in recent months a significant jump in the addiction of the association’s godchildren to online games. “Thanks to the confinement, the children found themselves almost 8 hours a day in front of the screens, with all the dangers that this entails“.

End of 2020, Paris Match reported an unprecedented increase in online child crime, especially in the Philippines. The files, which were counted until then “on the fingers of the hand»In France, would be more than 200 on the investigators’ desk. Children of the Mekong alert: “Internet is needed, but he do not forget the primordial importance of the human bond in education», Declares the organization, which has already set up awareness programs on the dangers of screens, gambling and the use of social networks … while waiting for the resumption of classes, in this region of Asia where the worst of the pandemic seems to be still for tomorrow.