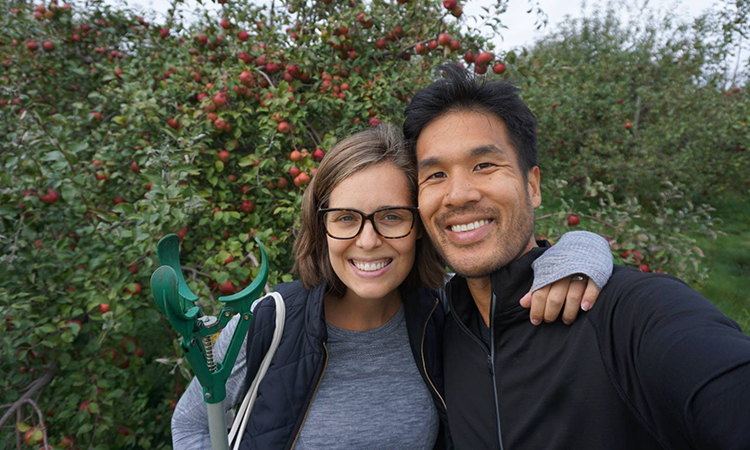 96% of Japanese women change to their husband’s surname after getting married, while Shu Matsuo Post does the opposite, and he changes his last name.

Shu Matsuo Post – a 35-year-old Japanese businessman – calls himself a feminist, but that spirit is not born.

During the first 28 years of his life, this man said that he had never tried to understand the feelings of women living in a patriarchal society, as in Japan. “Until I met my current wife Tina in 2014, everything changed,” Shu said.

Tina Post, an American, helped Shu realize that being a man doesn’t have to follow outdated dating scenarios or have to pay for dates. Shu says this is the first feminist awakening.

When the two decided to get married in 2017, no one wanted to give up their last name. Japanese law prohibits couples from using their surname separately. When married, the husband and wife will follow one of the couple’s surname and be decided at the time of marriage. However, in fact, 96% of wives take their husband’s surname. Most Japanese women accept to change their surname after getting married, but more and more people feel attached to them as a girl.

To be fair, both of them changed to each other’s last name.

In the US, it only took Tina 15 minutes to change her birth name from Tina Post to Tina Matsuo Post. Meanwhile, it took Shu 8 months to legally change his name from Shuhei Matsuo to Shuhei Matsuo Post in Japan, including passport updates, driver’s license, credit card, flight pass, email account, card…

“In Japan, most men don’t have to go through this. I still hear people wondering why a woman must take her husband’s surname after getting married? If it’s her choice, it’s great. But if not. Why do men expect wives to lose their identity to support her husband? “Shu asked.

This man also said that the more he learned about gender stereotypes, the more clearly he saw the injustice between men and women in everyday life. “Discrimination is everywhere and harms everyone”. According to Shu, the fact that Japanese women are forced to change their original names makes them feel “wiped out” after getting married. Not to mention, it will be even more difficult to build a career and create a reputation for yourself.

Changing family names in marriage is only one aspect of life that is detrimental to women, so Shu believes that gender equality should start in the family.

Entrepreneurs from Tokyo say men need to admit they have too many privileges. He accepts the fact that Japanese men are very difficult to do like him, especially the older generation, but have very heavy patriarchal characteristics.

“In Japanese society, discrimination against women is accepted as daily breathing air. Sometimes I don’t get a chance to show them where they’re wrong,” he said.

Shu wants to spend more time educating young people. “I imagine my children or grandchildren laughing about today’s gender inequality, because their world is a lot better. I really hope that day will come,” Shu said.

While on leave at home for 7 months with his wife to take care of young children, Shu uses social media to tell his story to convey the message of “equal rights men and women”. Recently when he heard that a friend who was about to become a father next month knew what Shu was doing and decided to quit taking care of his new baby, he was very happy.

There are two things a man should do to partially alleviate the inequality in the family, he said: Do more housework and take leave to care for the children.