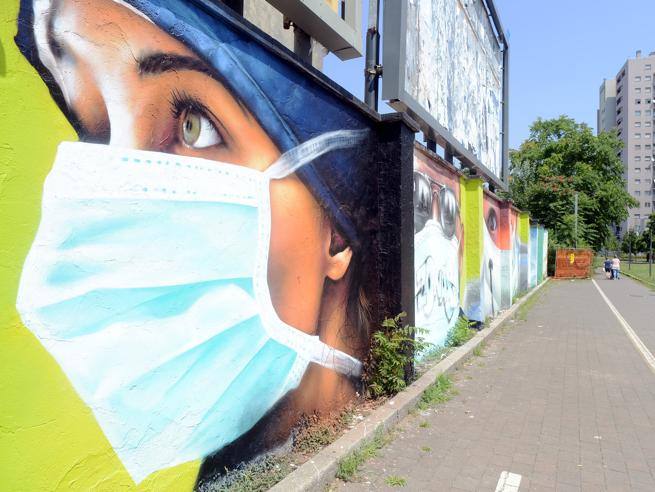 It’s been over a year since our lives have changed with a speed and depth that no one could have imagined. We ourselves have a hard time remembering what happened just a few months ago. Everyone has hidden in the depths of their memory an image that more than others evokes the reality we have lived. Mine that of Andrea Bocelli who sings Amazing Grace in the churchyard of the Cathedral, others will remember the prayer of Pope Francis in front of a dramatically deserted St. Peter’s Square, still others may have a personal or more intimate one, but it is enough to have the courage to recall them to feel a profound tremor within us.

Not all went well as we told each other in the dark to help us make it. A year later Italy is a more disintegrated and poorer country than ever in post-war history, marked by grief and a disastrous economic crisis. Ever since the first two cases of Chinese tourists were registered in Rome, I have always tried to be as rational as possible, especially when I gave my reflections to the pages of this newspaper, a pragmatism that unfortunately did not reveal many positive notes, and even today the epidemiological data remain dramatic.

However, for the first time since the start of the pandemic, I see a light. I hope I’m not wrong, but finally recognize a national strategy in the vaccination campaign with a follow-up program gradual and cautious reopening a sign of great reassurance.

Vaccines will soon arrive, production capacities will increase, the limiting factor will soon become only the ability to implement and accelerate the vaccination campaign. After the summer, the problems will be linked to that slice of the population that for various reasons will not be vaccinated (remember that today we have no possibility of immunizing the youngest), to those who, despite the vaccine, will not develop adequate immunity, to those who will be infected. from variants and skeptics. The issue of the compulsory vaccination will then become topical. Patients in the coming months will reduce as mortality will decrease, also thanks to the new therapies arriving, but the long-term scenario will be that of a forced coexistence with the virus, in an endemic situation whose epidemiological trend will be dictated by the emergence of new variants, by our behaviors (unfortunately the masks will still accompany us for not a few months) and by a vaccination campaign that risks becoming permanent if it is true that immunity has a limited time duration.

Lhealth structure will radically change compared to before the pandemic, we will have to learn to wisely exploit the flexibility shown by our hospitals, which will have to become structural. These months have taught us that you cannot go in no particular order and, without harming regional autonomies, a national direction indispensable for the management of health, the government seems to have well realized this by giving a decisive central acceleration to the vaccination campaign.

Throughout the pandemic it became clear how school, health and economy are closely and inextricably linked and we know well how our country has dedicated minimal resources to these crucial sectors for our growth compared to other industrialized states and to the standards of the European Union. For decades, schools and health care have received only the crumbs and leftovers of national budgets, today we are paying the bitter consequences.

Hospitals are the cornerstones of resistance to the viral attack, the National Health Service has well demonstrated, despite cuts and reductions, its fundamental function, thanks to the strength, competence and dedication of its staff who paid a heavy price to the pandemic. It will be further strengthened and rethought, planning a new organization, and it will also require investments in research, precisely the ones that have been lacking in many years (the IRCCS, a national peculiarity never sufficiently exploited, are a determining force of the NHS), while the territory will be a area to be built brick by brick.

Today even vaccines are necessarily entrusted to those who by definition should only manage acute situations. If vaccinations are now the furthest line of resistance, the future of healthcare is more complex and made up of a thousand challenges, the first will be to make up for the time lost with all those left behind during these months and suffering from non-Covid diseases, but another theme will be taking on the long-term consequences of those who have contracted the viral infection, of which we still know little.

Post-pandemic Italy will be a different country from the one we have known, we all have the responsibility for reconstruction; the huge European funding and a government of quasi-national unity are opportunities that we cannot miss.