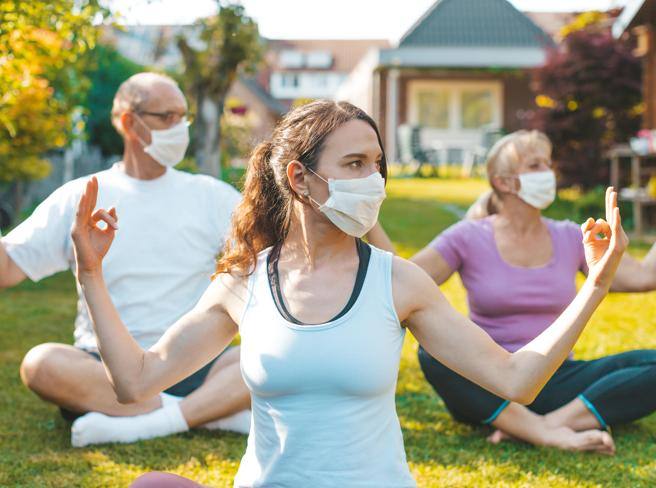 Can you get sick with Covid from being outdoors? How much does the transmission of the virus in outdoor environments affect the trend of infections? Little, very little indeed. This is not new but the data disclosed by theHealth Protection Surveillance Center (HPSC) which has the task of monitoring the spread of the coronavirus in Ireland and the origin of the outbreaks gives a good idea: only one in a thousand cases is attributable to outdoor transmission. The figures were published by the Irish Times.

From the start of the pandemic until March 24 they were detected 232,164 cases of Sars-CoV-2 but only 262 were linked to an outdoor transmission, ie only 0.1% of the total. According to reports from the HPSC there are 42 outbreaks associated with gatherings in the open air. Half is about building sites with 124 confirmed cases and the other half sports and fitness activities to which 131 infections are linked even if the Entity has specified that “it is not possible to determine where the transmission occurred” with certainty. Translated: maybe the workers got infected during the lunch break, eating together and not while working on the construction site. The same thing can be true for those who have done outdoor physical activity. Furthermore, in 20% of the infections reported in Ireland the source of the infection is not known.

The Irish epidemiological data actually reflect what international studies have been reporting for some time. A research carried out in China involving 1,245 infected found that only three cases were attributable to outdoor activities, specifically, one person has infected two others while chatting on the street without a mask, it is assumed at close range. L’On the other hand, 80% of infections spread within the home (as also reported in Italy by the Istituto Superiore di Sanità), the 34% on public transport. All the outbreaks involving three or more people occurred indoors, confirming that it is precisely the closed (and poorly ventilated) spaces that represent a high risk of contagion. Another emblematic fact goes in this sense. A researcher, Swinkels, K, is compiling a database with Sars-CoV-2 superspreading events which, despite its limitations (mostly based on newspaper articles), renders the order of magnitude well: on 33,741 reported infections only 11 occurred in exclusively outdoor environmentsAccording to a University of California review that analyzed five studies on the subject, the chance of contracting the virus indoors is 19 times greater than outdoors. The Irish Times reports that Professor Mike Weed reviewed 7,500 cases of contagion in China and Japan prior to the lockdown and concluded that outdoor transmission was “so limited that it was statistically insignificant“. The outdoor virus dissolves quickly and the risk of contagion is limited. With some exceptions.

On the basis of these data, does it make sense to prevent or advise against people from attending parks, going to the beach or watching a football match at the stadium? And make it necessary to always wear a mask even when on the road? “There is no doubt that infections occur mostly indoors, but at this point in the pandemic, wearing a mask is always to be considered a social habit, an educational fact, a style that guarantees a high standard of attention. We all consider ourselves potentially infected and with the mask we guarantee protection to others »summarizes the virologist Fabrizio Pregliasco.

However, from a strictly scientific point of view, things are a bit different. “Outdoors you can do any activity, even without a mask, just keep a distance of one and a half meters with other people” confirmation Giorgio Buonanno, full professor of Environmental Technical Physics at the University of Cassino and at the Queensland University of Technology in Brisbane (Australia). It all depends on the dose of infected aerosol you inhale. “The risk becomes not negligible during a conversation that lasts for more than a quarter of an hour, without a mask, between several people facing each other, for this reason the appetizers, even outdoors, they pose a problem. If, on the other hand, you are faced with a person who is only breathing, even at a distance of one meter the risk of contagion is negligible ». The situation is different for contact sports: there is no safety distance and “contact” is intrinsic in sports such as football, rugby or basketball, however “the times in which you are very close are limited and the risk of contagion, consequently, limited, ”says the physicist.

Watch out for distances

Among strangers, always talking about the outdoors, it is the distance that must be kept an eye on. In these contexts i droplets (the largest droplets emitted by speaking, breathing, screaming) fall within fifty centimeters. L’aerosol (smaller droplets emitted in the same way but destined to evaporate) dissolve within one and a half meters. For this reason, with a distance of one and a half meters, even without a mask, the risk of contagion is negligible and many activities could be carried out without danger. “The droplets are always avoided because it is difficult to approach a person less than 50 centimeters if you are not in an intimate relationship – points out Buonanno – and the standard distance is instead of about 80 centimeters”. And the leave soccer? “If the fans at the stadium keep a meter and a half away, even if they were screaming and there was a positive between them, the risk of contagion is almost nil. The criticalities can be the entrances and exits, if the distances are not guaranteed ». They could then resume activities such as outdoor cinema or concerts? «On concerts – concludes Buonanno – a lot depends on how they are organized: certainly the crowd under the stage is not acceptable, there is no safety distance. But concerts or cinemas under the stars with spaced chairs are not a problem. Which instead exists in closed environments that must be managed with adequate ventilation to be able to reopen the activities “.