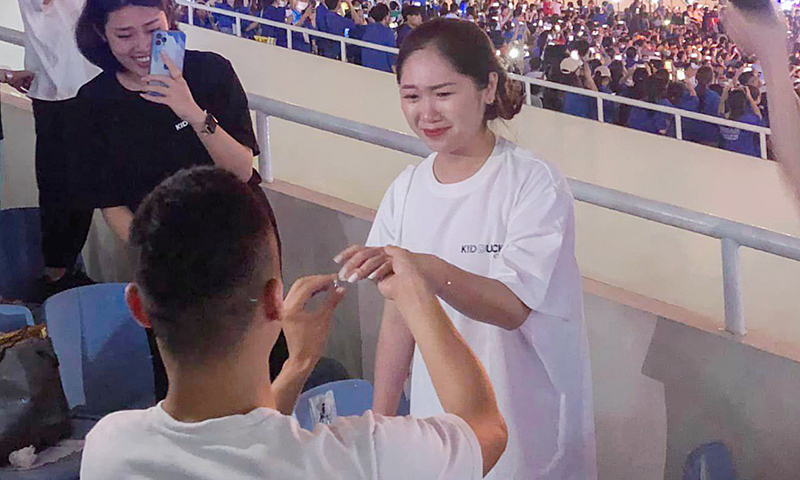 HanoiWhen the first set of fireworks in the opening ceremony of the 31st SEA Games was just fired, Ngoc Tien pulled out his ring, knelt down to propose to his girlfriend Bao Ly, on the evening of May 12.

All eyes in stand A turned to the left wing when Nguyen Ngoc Tien, 24, tried to speak loudly to drown out the fireworks: “I’ve been waiting for this day for a long time. Be my wife.” The moment Luong Hai Bao Ly, 23 years old, nodded in agreement, the whole audience simultaneously cheered and clapped to congratulate the young couple.

“I froze for a few seconds because of surprise. I can’t believe that the second SEA Games opening day after 19 years is also the day they proposed to each other,” Bao Ly said.

Nguyen Ngoc Tien shared more, his idea of ​​​​proposing to his girlfriend appeared 8 hours ago. “I planned to do this on May 15, but when I got tickets to the opening ceremony, I changed my plan,” explained Mr. Tuan.

On the afternoon of May 12, Tien contacted the shop to order the wedding ring, asked to get it early, and invited a group of 5 close friends to watch the opening ceremony to film and take photos. The 24-year-old also secretly called his girlfriend’s family in Quang Ninh to ask for permission to propose.

“The day the family wishes is to see the children exchange wedding rings. Today, let’s do what makes us happy. The two of you are always supportive,” Bao Ly’s mother told Tien.

All preparations were completed in time before the opening time. At 6 pm on May 12, Tien and Ly went from home to My Dinh stadium. Contrary to the excitement of his girlfriend, Tien was tense and speechless, muttering what he was going to say during the marriage proposal, for fear of forgetting. After nearly two hours of organizing the opening ceremony, Tien constantly looked at his watch, reminding friends to pay attention to his words, for fear of revealing his plan.

After the performances, more than 9 hours, a few firecrackers were fired. Thinking it was time to propose, the whole group of friends pulled out their phones, stood in position, prepared, but realized it wasn’t. “It took 3-4 wrong guesses to arrive at the 10-minute fireworks display. We were as confused and nervous as the insiders,” said a member of the group. The couple’s happy moment was recorded by friends and quite a few spectators using their phones.

“Not to show off or show off. I just want to create a surprise and make a mark on our special day,” Tien said.

Ngoc Tien and Bao Ly have known each other for more than 5 years, when they were students at the Vietnam Youth Academy. Impressed with the younger brother by his smiling face, sophistication and empathy when talking, Tien determined to pursue. And Bao Ly was attracted by the humor, sarcastic, and somewhat “mean” of her boyfriend.

Sharing the same love of travel, the couple has made many trips along Vietnam, in their free time. Graduating from school, Tien works as an office worker, a fitness trainer, while Ly pursues content creation. The two also combined to open their own fashion brand.

After the proposal, the couple plans to hold an engagement ceremony and wedding in the near future. “The specific time has not been determined yet, but we will count the days to go home together,” Ngoc Tien confided.