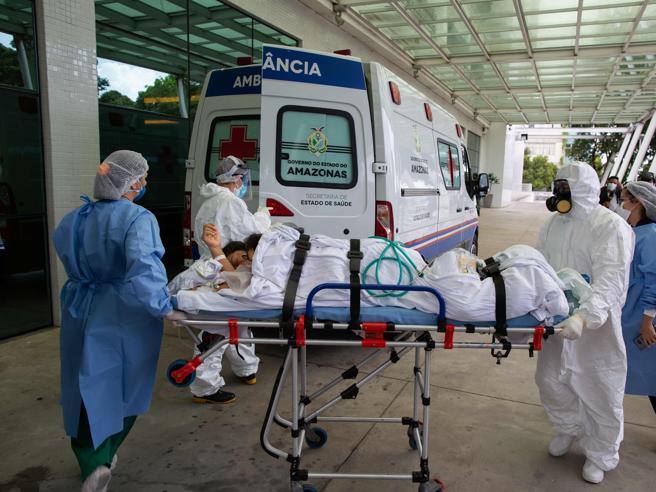 Concern is growing over some variants of SARS-CoV-2 being monitored by the scientific community. The last one under examination is the one sequenced in Brazil, called P.1 and called, precisely, “Brazilian”. The London government, already struggling with the “English” variant, has decided to impose the temporary and precautionary closure of the UK borders, after a case of the “Brazilian” variant was mapped in the UK.

Variants are changes in the genetic sequence of the virus that have many mutations in them. The Brazilian variants are actually two: B.1.1.28 (K417N / E484K / N501Y), renamed P.1, and B.1.1.28 (E484K). Both have a mutation, the E484K, common to the “South African” variant, that is the one that worries, because it would have been seen to escape antibodies in some studies. In particular, according to the research of the Imperial College of London with the University of Oxford and of San Paolo which has sequenced and highlighted the variant in Manaus (capital of the great Brazilian state of Amazonas), the lineage called P.1 contains a constellation unique of mutations, including several mutations of biological importance known as E484K, K417T and N501Y. The N501Y is common to the “English” variantwhile P.1 and the “South African” variant share three mutation positions in the spike protein, including E484K. The three variants, despite the similarities, seem to have arisen in such a way completely independent and appear to be associated with a rapid increase in cases in the places where they have been identified.

The mutation that evades antibodies

The E484K mutation is under observation because shows a 10-fold reduction in neutralization by various antibodies compared to the “common” virus in some patients. This was highlighted, among others, by a study by the University of Siena which, in simple terms, probed the penetrability of the neutralizing plasma of a convalescent patient “subjected” to the “authentic” virus. The plasma completely neutralized the virus for 7 passes, but after 45 days the virus found “a way” by modifying itself and the modification of day 73 resulted in the emergence of the E484K mutation in the receptor binding domain. With other modifications, a variant that was completely resistant to plasma neutralization was generated on day 80. Variant P.1 is also deemed responsible, in Brazil, for the re-infection of a patient 30 years old already cured of the disease on the occasion of a previous contagion. However, the E484 mutations reduced neutralization, but did not cancel it. Reduced neutralization does not mean the absence of immunity and careful study will be needed to determine the implications for protection in humans.

The fact that the same mutation has evolved in different places could mean that the virus, when pushed to mutate, finds the same solution. It could be for this reason that the variant arose in a place where most of the population had already been infected, such as Manaus. The high prevalence causes the coronavirus to change in order to infect as many people as possible. In Manaus it is estimated that in October 76% of the population was infected, based on a sample of antibodies found in blood donors. In November the P.1 lineage was not yet present, but in the samples collected between 15 and 23 December, instead, it was identified in 42% of positives. The further concern is that the variant is circulating in a place where a certain threshold of immunity should have been reached. Studies are ongoing.

Meanwhile in Brazil the situation is very bad: in the state of Amazonas there is no longer medical oxygen and supplies from Venezuela are expected. Health authorities attribute the enormous increase in infections and the consequent increase in demand for hospital beds to the spread of P.1. The most important implications concern transmissibility (and it seems that for all these variants it may be greater) and any resistance against vaccines, on which for now there is a cautious optimism from various parts of the scientific community. However, the need to be able remains map the spread of subtypes with genetic sequencing (which not all countries perform at the same pace) and that of block transmission of SARS-CoV-2 as soon as possible, because more infections mean more deaths and because the virus, under the pressure of vaccines, is in any case pushed to mutate more and we do not know whether for better or worse, for us.