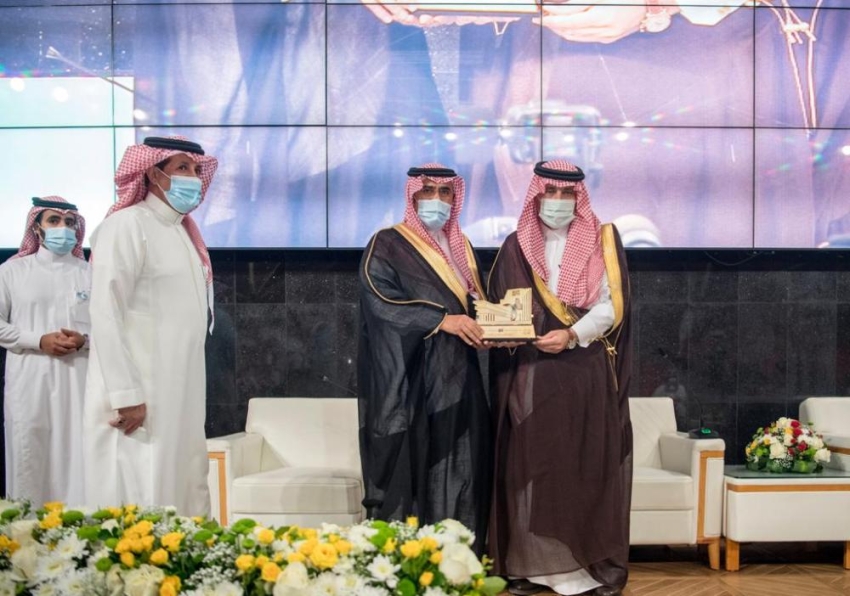 His Excellency the Acting Minister of Information and Chairman of the Board of Directors of the Saudi Press Agency, Dr. Majid bin Abdullah Al-Qasabi, honored His Excellency Mr. Abdullah bin Fahd Al-Hussein, former President of the Saudi Press Agency, on the occasion of his retirement, in the presence of the President of the SPA in charge, Dr. Fahd bin Hassan Al Aqran, and a number of officials and employees of SPA .

At the beginning of the ceremony, Dr. Fahd Al Aqran delivered a speech in which he welcomed the Minister of Information in charge, Mr. Abdullah Al-Hussein, and the attendees, and said: “Thanks and appreciation to the generous gathering who attended this blessed month to join us in honoring a media stature who spent more than forty years in one of the most important fields of work, which is the media. In a journey of generosity and loyalty, a journey that illuminated the souls of an entire generation of media professionals, a journey full of construction and distinction, in which an unforgettable trace was engraved.

In his name and the family name of the Saudi Press Agency, he thanked His Excellency Mr. Hussein for all that he had provided during the past four decades, wishing God success and repayment, and also thanked the Minister of Information in charge for his keenness, interest, and gratitude for what Hussein had provided in his career in the service of the homeland.

After that, Dr. Majed Al-Qasabi delivered a speech in which he said: “On this blessed night of the blessed month, we gather to honor a symbol and stature, and he is my brother, His Excellency Mr. Abdullah Al-Hussein, who spent forty years and gave and presented over forty years and more than giving and he rose in positions until he sat on the throne of SPA, and presented His effort and his work with all abilities and distinction, as he is an example of the responsible, honest, sincere, beloved, counselor, and his relationship with his colleagues and all people is distinguished, and with my name and the name of the employees of the Ministry of Information we say thank you from the depths and good luck to you wherever you are. “

Then a speech was given by the “SPA” employees, in which they thanked His Excellency Mr. Abdullah bin Fahd Al-Hussein for his efforts in serving this media establishment.

After that Mr. Abdullah Al-Hussein gave a speech in which he said: “Praise be to God and thanks to God Almighty for the completeness and perfection of my surgical journey. I thank my family for the support and patience during the performance of my work as they have been supportive of me and bear the pressure that I caused to them. Saudi News in the year 1402 AH until it left its presidency, and after God they have the merit for “WAS” to be in the ranks of the world’s advanced agencies, thanks to all of them for their loyalty and efforts in all areas of news, technology and languages.

At the end of his speech, Al-Hussein thanked His Excellency the Acting Minister of Information, Dr. Majid bin Abdullah Al-Qasabi, for his keenness and interest in honoring him at this ceremony, and thanked the President of the Saudi Press Agency in charge, Dr. Fahd bin Hassan Al Aqran.

The ceremony included the screening of a film entitled “The March of His Excellency Abdullah Al Hussein” and words of thanks from the Al Hussein family. At the end of the ceremony, Dr. Majed Al-Qasabi handed Professor Abdullah Al-Hussein a souvenir in honor of him and his journey full of achievements, then commemorative photos were taken on this occasion.