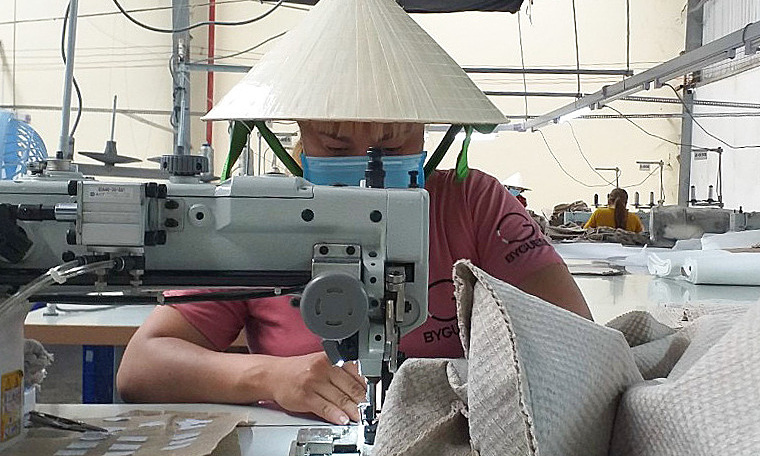 Ho Chi Minh City“Go home or stay?”, Nguyen Thu Thuy asked her husband when the whole neighborhood had gone home. In the end, they decided to stay to find the opportunity to change jobs.

After five years of working away from home, this was the first time Thuy hesitated. Thuy and her husband work as assistants. Mr. Nguyen Thanh Co, 32 years old, Thuy’s husband is paid 300,000 VND a working day. Women’s prices are lower, only 250,000 VND a day. “The sun has a job, but there is no money in the rain,” Thuy said about the specifics of the job.

The outbreak of Covid-19 caused the couple to be unemployed since the beginning of June. For three months now, they have begged for a rent of 1.5 million VND per month. The family of four relies on charity food and government support.

Seeing people from the provinces pouring in, Thuy’s mother constantly called her son to urge her son. In 7 days, Hau Giang, her hometown, welcomed more than 9,000 people back to her hometown. But running out of money, afraid of bringing the disease home, she and her husband tried to hold on. “It’s not safe to stay, but it’s more hungry than in the countryside,” she sighed. More than a month ago, Thuy’s husband was F0 after going out once.

Adults have a meal, a porridge meal with dried fish, fish sauce, and change to instant noodles. “But the children need milk,” Thuy said. Unable to borrow money, she found support groups to ask for milk for her children. Afraid but in the end, she had to ask for help online. Three times begging, two children 4 years old and 2 years old received 350,000 VND, along with milk cake from benefactors. On the afternoon of October 7, I asked for milk again. The old milk ran out a few weeks ago, Thuy left information with a phone number under the calling post. All night, she waited on the phone, hoping for someone to contact.

Looking at the deserted inn in Tan Uyen town, Binh Duong province, Thuy and her husband knew that they were the few people who refused to mingle with the flow of people flocking to the Western provinces or the North in the past few days. According to statistics from the Ministry of Public Security, since the southern provinces ended the distance from October 1, there are about 2.1 million out of 3.5 million workers in Ho Chi Minh City, Binh Duong, Dong Nai and Long An. want go to hometown.

Living in a cramped apartment for four months, Tran Anh Huong’s family, 22 years old, living in Hoc Mon did not plan to return to Bac Lieu to avoid the epidemic. Easy to go, difficult to return is a common concern of Huong and many workers. “I might lose my job if I don’t come back in time when the company calls me to work,” she said, “Not to mention the people in the countryside are afraid of Saigon people coming back. If it’s F0.”

Huong’s worries are not unfounded. By October 5, Can Tho recorded 30 out of 54 new cases of Covid-19 who had returned from another province; Hau Giang has 19 cases, Tra Vinh 10 cases, Ben Tre 8 cases; Dong Thap has 60 out of 67 cases are returnees.

Isolation areas are overloaded, some provinces let people go home to monitor their health at home, if they test negative or have been vaccinated. Less expensive, but Huong is afraid of discrimination when returning from epidemic areas. “Infection is already suffering. If you spread the disease, you will have to leave the country,” she confided.

No worries about bringing the disease home, but the whole family of Mr. Do Xuan Khanh, 31 years old, living in Vinh Loc B ward, Binh Chanh district, Ho Chi Minh City could not return because they could not leave 7 workers in the garment factory even though they had temporarily stopped working. Closed for more than 4 months.

No more income but still have to pay wages for workers, rent and meals, the owner of the garment factory calculates that he loses more than 15 million VND per month. Having spent all his savings, Mr. Khanh has not been able to pay the rent for two months. The wife had to post a message asking for food for 11 people.

“Two years of opening a factory, I never thought I had to ask for help to get through the day,” Khanh said. Thinking of closing the factory, giving workers a break, but thinking about the struggle to find skilled workers when opening the factory, he stopped and tried to keep the workers.

“Skilled and experienced workers leaving their hometowns can cause disruption of the labor source. It takes a very long time to restore production,” said Mr. Le Quang Trung – Former Deputy Director in charge of the Department of Employment. do, said the Ministry of Labor – Invalids and Social Affairs.

Another important reason why Thuy and her husband in Binh Duong, Anh Huong and Khanh’s family in Ho Chi Minh City decided not to return to their hometown, “they don’t know how to make money” while the chances of recovery are higher when they return home. they stay. “When the city reopens, workers will at least be able to work at the old company. Along with that, there will be opportunities to find new jobs when the economy recovers. Income is gradually improved”, Mr. Trung forecasted. .

This happened to Anh Huong. Her previous workplace urged her to return. Every day she is paid 100,000 VND for 4 to 4.5 hours of sales, equal to the old salary.

Many activities were eased, Thuy discussed with her husband to apply for a seasonal job at garment factories. The job brings a stable income, not dependent on the weather like a slave. Thuy Thanh’s fear of not having a job when a garment factory called her to work, after a few days of applying. Her husband also received news that he is preparing to start construction next month. “It’s not too late to stay home to work. It’s not too late to return home,” he encouraged his wife, “And now, even if I’m hungry, I won’t come back”.

The labor market report released by Navigos recently revealed that 56.7% of enterprises participated in the recruitment survey immediately after returning to normal operations. Of which, 50% will hire completely new employees. The Center for Human Resource Forecasting and Labor Market Information in Ho Chi Minh City (Falmi) also said that the city needs to recruit about 44,000-57,000 workers in the fourth quarter.

Two days ago, Mr. Khanh’s garment factory received the first order after nearly half a year, making several hundred masks with embroidered flowers from patrons. Nothing compared to the number of orders he received before the epidemic, but the demand in apparel gradually changed. The owner of the garment factory began to contact the suppliers of fabrics and raw materials.

“As the city gradually reopens, there will be opportunities for those who stay,” said owner Do Xuan Khanh.