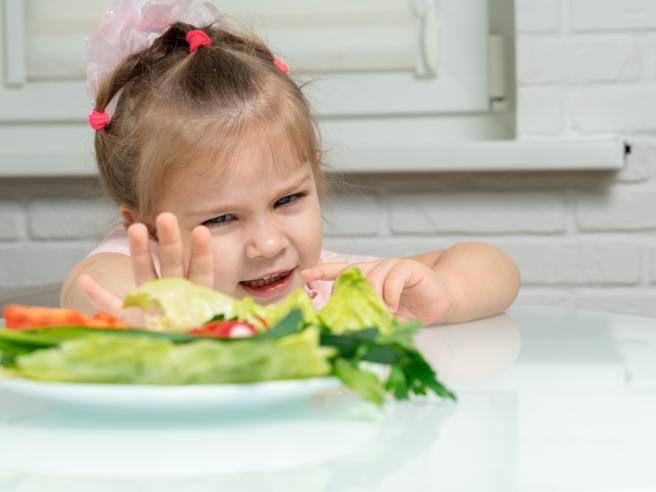 Getting the little ones to eat fruit and vegetables is an unlikely task for almost all parents: it is easy to say to introduce at least five servings a day of vegetables, but then the children for a snack look for biscuits instead of carrots, an ice cream instead of an apple . Thus it is estimated that one in five children does not consume enough “green” foods, while half turn up their noses in front of vegetables: meal time often becomes a struggle and food something with which to threaten, punish or reward children’s behavior .

Mistakes that can lead to an unhealthy relationship with the table, according to reseekers of the English Loughborough University who have to solve the age-old question developed a guide, the Child Feeding Guide, full of advice so as not to resort to useless or even counterproductive methods and instead choose winning strategies that are able to convince even the most rebellious without them almost realizing it. The very rich guide, which is available for free online in English, has been tested in families with children from six months to four years and the results are remarkable: not only is the consumption of vegetables growing, mothers also reveal that they feel less stressed and worried about the diet. offspring.

“Many parents worry about their children’s future when they see that it is almost impossible to make them eat healthily: the guide reassures them by pointing out that the distrust of the little ones towards new foods is common and normal, but above all that it can be overcome with an approach of proven effectiveness », explains one of the authors, psychologist Emma Haycraft. The secret is to explain the reasons behind the children’s behaviors and the consequences of the parents’ choices, who are certainly first of all invited to be patient: a study published in Journal of Nutrition Education and Behavior proves that one of the best ways to overcome distrust is do not lose heart and continue to offer healthy foods to children, without paying too much attention to their whimsthe.

Don’t give up and encourage

After five, six times in which the less appreciated vegetables are brought to the table, the probability that the children finally decide to taste them and that they will also end up liking them doubles; Land chances of success then rise again, if parents accompany the menus with phrases that can be of positive encouragement. Telling the little ones that they will have Popeye muscles if they run out of spinach so while it is a small lie, it could really convince them to eat something green without protesting too much.

The habit of so many new and different flavors is established right from gestation. Varying the diet a lot during pregnancy and breastfeeding reduces the likelihood that babies develop too much distrust of new dishes
Often the refusal of fruit and vegetables derives from the lack of confidence of younger children with these foods: Allowing them to play with it helps, for example by using real vegetables in the market game or using them to create collages, shapes and more. The pride or satisfaction of having contributed to a “grown-up” task by helping in the preparation of food it then helps the children to find the curiosity to taste, perhaps trying to put the vegetables in their mouth even during the preparation of the dishes.When the child eats something healthy, he can be rewarded with an activity he prefers or by giving him points in a “prize game” that will get him to get something he wants, thus teaching the importance of waiting for a reward.

Never get anxious when faced with a child with difficult tastes: it can only worsen the situation, pushing to choose ineffective if not counterproductive convincing strategies. Then we must not stop bringing fruit and vegetables to the table because the children do not love them egand mum and dad eat “green” and make positive comments on the dishes the little ones, by imitation, sooner or later may want to taste the vegetables.
Never force children to eat a food they don’t like or have started to refuse it is not a right strategy, because it associates a bad experience with that food and reinforces the rejection.Promising a treat if you finish the side dish can work on the spot, but it has no small side effects because it leads to craving high-calorie foods more and to consider them as a way to manage emotions and give themselves comfort.It is much more effective to prevent the child from finding junk foods that he should not eat in plain sight, rather than having snacks at home high calories within its reach and prohibit its consumption by threatening punishmentsIf it is served on the plate it is too much for it to be finished insisting that the child eat everything can lead him to not knowing how to recognize the sense of satiety: trusting children and when they say “enough” is useful for their nutritional education