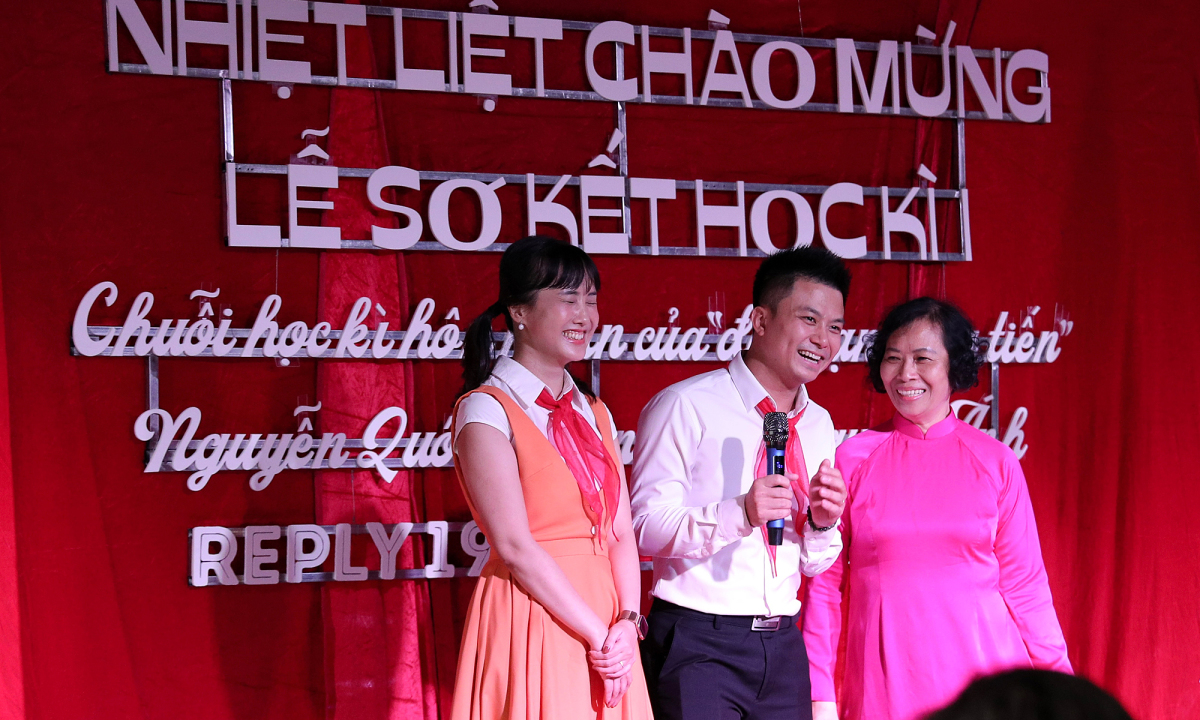 The wedding ceremony with the theme “Reply 1996” of the same 35-year-old couple was held in an entertainment complex in Tay Son street, Dong Da district. More than 200 guests attended, as soon as they passed through the door, all would be given red scarves.

In the yard, the party space is designed to recreate the scene of the elementary school gate at the end of work in 1996, with snacks reminiscent of “a childhood sky” with Thai umbrellas, crab chips, candy cart, cotton candy. The stalls of banh gio, duck eggs, rib porridge, hot rolls and too pho are the most attractive. The popcorn burden is also visited by many people.

The main stage has the words “Preliminary ceremony of the first semester, the marriage semester of the couple, Nguyen Quoc Khanh and Vu Nguyet Anh”.

At the “zodiac time”, all guests, along with the bride and groom, are invited to stand up to salute the flag, sing the national anthem, and chant slogans commonly found in traditional school flag-raising ceremonies. primary school.

At the beginning of the program, MC shared: “At the same time last year, due to Covid-19, the opening ceremony of the marriage semester of Khanh and Anh could only be conducted within the family. I’m here to congratulate the two of you on the preliminary ceremony and wish you both hand in hand to move forward, in solidarity and affection in the coming semesters.”

On the red screen and flagpole stage, Ms. Ung Thi Ngoc Dung, the homeroom teacher of the 4th grade at Chu Van An Primary School of the groom Khanh and the bride Anh was also invited to attend as one of the guests. main invite. Ms. Dung shared that she was very happy to see her parents and students again 26 years ago.

“One day, there was a small-sized student with a very loud voice, standing under the class shouting: ‘ Nguyet Anh, I love you’. She and her classmates laughed. After a moment of silence, each student’s eyes were surprised. However, mixed with anxiety, waiting to be scolded by her. But she just laughed,” Ms. Dung said.

That student is Nguyen Quoc Khanh and the girl he confessed to is his current wife. Khanh said that at that time, he liked Anh because her friend was very pretty, cheerful and funny. Khanh strongly attacked Anh and always wanted to declare “sovereignty”. For every male friend who touches Anh’s field, he will receive a “war letter” that promises to fight.

Reminiscing about that day, Nguyet Anh remembers that she also fluttered with her “handsome and fiercely pursued” friend. Every other day, Khanh sent a very long and cheesy letter. There was also a time when she threw the letter straight into the unread trash, right in front of her friend, although later sometimes regretted it for acting rude in her childhood.

Anh’s best friend, Tam Lan, said that in the past, Khanh sat behind her and secretly stroked Anh’s hair. Because Khanh is the team leader, threatening to deduct the emulation points, so Lan doesn’t dare to tell you.

In middle school, everyone went to a different school. Once in 6th grade, Khanh saw Anh having tea with another male friend, and immediately called her at night to interrogate her. In high school, there was a time when Anh was waiting for the bus to go to school, when Khanh rode a bicycle and offered to pass her. In the next few days, a student from Pham Hong Thai school continued to take his friend from an Amsterdam school for the gifted. But then suddenly one day he disappeared.

They haven’t heard from each other for a long time. Every year, Nguyet Anh also visits Ms. Dung and gets in touch with many friends who used to be in the same primary school. Khanh is isolated.

In 2020, in the Facebook group of class 4B of Chu Van An school, the friend Viet Anh posted a photo, with the words: “Inadvertently caught a stray friend, will you be remembered? Maybe Anh is sobbing? huh”. Immediately, friends commented, “I don’t recognize it when I look at the picture, but when it comes to Anh, I can immediately guess it is Quoc Khanh”.

They reunited in the preparatory class meeting before the day to visit the teacher. That day, Khanh heard Anh sing with his friends the song “Uncle Ho – The one who gave me everything” – a children’s song when he was a child Anh used to perform in front of the whole school and Khanh gave flowers. His heart fluttered again at her cuteness and cuteness.

The day they met again, Khanh revealed that the reason why he suddenly disappeared in high school was because… afraid of being nagged. It turned out that on the days when Anh went to school, Khanh was taught by an exemplary student all the way that “must focus on studying, not skip school to play soccer or play video games anymore”… which scared him. .

“When I met her again, she still talked like that, but after I was beaten up by life, I understood what she said. I told myself that in the past, I would never give up when I listened to her words. miss each other,” said the groom, Khanh, laughing.

Love revived in the couple who are now grown up and experienced marriage breakdown. The more they talked, the more they felt “like they’ve dated from a previous life”. Every heartache, every innermost thought can be confided to each other. “We often gossip until 2-3 am. Together, we feel happy, comfortable, each of us can be ourselves,” the couple said.

Sometimes Khanh often laments “Why didn’t we see each other sooner?”. Nguyet Anh countered: “It’s not always good to see each other again soon. We have to wait until we both have experienced many ups and downs and stumbles before we realize what the value of life is, where we are, we need someone. How to go along, only then will you know how to cherish the people around you, then make enough efforts to overcome different things to reconcile, adapt and be together sustainably.”

In the party “Reply 1996”, many “historical witnesses” of the bride’s love story were also present to review the memories. Anh and Khanh’s son and daughter wish their parents: “One hundred years of happiness like now”.

Quoc Khanh and his wife said that this wedding is the realization of what has been cherished since the two of them were together. Every detail in the wedding, they are very painstakingly prepared. With the theme “Back to 1996”, they collected from a typewriter, a Russian tortoise, a peacock blanket, a red and blue nylon tablecloth…

“My favorite is the butter tube to store marbles displayed in the decor area to take pictures for the party. It has been used by a neighbor’s family to measure rice from decades ago until now, so it looks very colorful. It is its normality and simplicity that make it a special value that new and expensive decor items cannot compare,” Anh said.

The dishes of the party are also meticulously scripted and selected. They invite to their party a professional wheelbarrow to roll the dough and fry it on the spot like before. The shop of rib porridge, spring rolls, and duck eggs is a long-standing and famous online snack shop. Cotton candy counters, candy scissors are also hand-made directly on the spot. They also invited the seller to sell very smooth and fragrant tofu for more than 30 years in Quan Thanh Street, where the two used to come to eat when they were young.

“After many days around Hanoi, we also found a popcorn seller in the Hoan Kiem Lake area. Paid her 1.3 million dong to bring the goods to our party, but she thought We had to convince her until she agreed to go by car to pick her up with a light-cart to the venue,” Nguyet Anh said with a laugh.

The wedding leaves an impression on the guests. Many people say they have never experienced such a special wedding. Sometimes they laugh, sometimes they recover and cry because of old memories.

Guest Dang Phuong Linh said that this is the first and perhaps only “dress code” wedding where guests are required to wear a white shirt, black pants/skirt and must wear a scarf. red throughout the party. This is a special wedding when there is no cake cutting, toasting wine or tossing flowers or exchanging rings. It’s all simply “three things you love most about your partner, three things you don’t like about your partner, and three things you swear by for the coming semesters.” This is also a “weird” wedding, when the party menu does not have sticky rice, chicken, ball soup, not even spring rolls with phoenix. All are simply snacks that anyone who has ever experienced a student life cannot forget.

“Thank you for the one-of-a-kind wedding. Thanks to Quoc Khanh and Nguyet Anh, everyone was given tickets to return to their childhood, relive the feeling of being first, second, second, third, student. May the 9-year-old boy boldly express himself every year. love in front of class will forever hold the hand of her deskmate and never leave her,” Phuong Linh said.