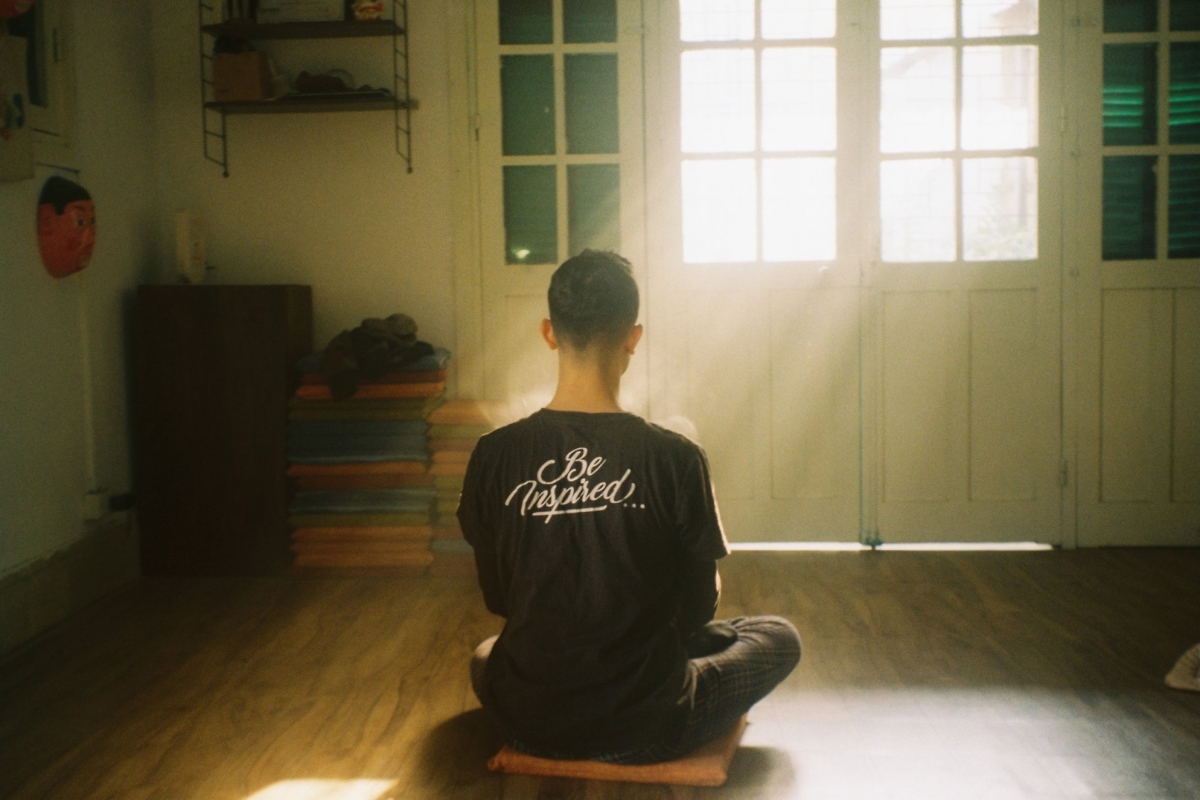 HanoiAt 8 pm on a Sunday, instead of watching movies as usual, Ngo Minh Ngoc opened Zoom, preparing to join an online meditation class.

Ngoc has never practiced meditation before, she joined because she was invited by a friend. Suppressed by two months of wandering around in a dormitory in Ba Dinh district and often at odds with her family, the 30-year-old girl working in the marketing field wanted to find a place to relieve her mind. “This class is still free, so I’ll give it a try,” said Ngoc, a resident of Cau Giay district.

At the same time, on the third floor of a house in Dong Da district, Nguyen Thuy Dung, a friend of Ngo Minh Ngoc, also finished preparing, waiting for class time. This is the third meditation class Dung has attended in the past year. Female IT worker wants to heal the damage caused by the relationship with colleagues.

At 8:15 pm, the online meditation class has about 15 people. By 8:30, when the class officially started, the number of students increased to nearly 200. All of them turned off their cameras and microphones, breathing in and listening to the voice of the meditator.

The meditation class that Ngoc and Dung attended was organized by Minh Dao, a writer born in 1993. Minh has been practicing meditation since 2015 and opened a meditation class “as a gift for everyone in the context of Covid-19”.

There are many ways to define meditation. According to the Cambridge dictionary, meditation is directing one’s attention to a single thing and is used as a religious act or a means to help regain calm and relax the body.

Another definition says that meditation is any act of keeping one’s attention comfortably in the present moment. When the mind is calm and focused on the present moment, we will no longer have reactions to past or future events, two major causes of nervous tension.

According to Dr. Nguyen Cao Minh, lecturer at the University of Education – Vietnam National University, Hanoi, who is highly trained in using mindfulness and meditation to solve psychological problems, meditation can simply be understood as: focus on the present moment and accept everything that is happening, including thoughts and feelings, in a non-judgmental way.

Some people think that sitting still and thinking nothing is meditation, but in fact, it’s just a form of exercise, a tool to learn meditation. One can meditate while doing other things. For example, when drinking a cup of tea, if you are fully attentive, using all five senses to perceive, that is also meditation.

In Vietnam, meditation has spiritual, spiritual and cultural values, so it has long been of interest. Recently, however, meditation has become especially popular with young people. “In the past, people were often interested in meditation when they were 40-45 years old. Nowadays, this age is much younger, mostly from 30 or under,” said Dr. Minh.

Minh Dao estimates that 80% of people who attend his meditation class are between the ages of 18 and 35. Huynh Nguyen, owner of a meditation library on Nguyen Du Street (Hai Ba Trung District), also notices a trend in age rejuvenation. students after three years organizing meditation classes. “The audience for meditation is quite diverse, but the largest number is people from 22 to under 40 years old,” Huynh revealed.

Young Vietnamese people often know about meditation classes via the Internet and Thuy Dung is an example. Once surfing social networks, she typed in the phrase “meditation”, thereby getting information about the meditation class of Minh Dao and Huynh Nguyen. Some people like Minh Ngoc were introduced by friends.

Why do young people come to meditation more than before? According to Dr. Minh, there are two main reasons: the need to develop yourself and deal with psychological stress. Both of these needs are high among young people, but the need to deal with psychological stress is much more common. Compared to previous generations, today’s young people are especially interested in mental health, so they actively seek ways to prevent and solve them.

In fact, the more developed society, the more stress factors, thereby arising psychological problems. Huynh Nguyen said that his students often face problems such as stress, fatigue, and insomnia. For Minh Dao’s meditation class, most students experience “too many negative thoughts and emotions”.

Besides, in Vietnam, meditation is relatively accessible and affordable. A five-week basic meditation course organized by Huynh Nguyen ranges from VND 1.5 to 2 million. During the epidemic season, he maintained classes via the Internet, allowing participants to pay according to their ability. Minh Dao does not charge any fees.

If combined with knowledge of mental illness, meditation can become a form of therapy because it affects stress, which is directly proportional to psychological problems. However, meditation programs must be carefully and logically designed so that learners feel comfortable. “For example, depressed people have very negative thoughts about themselves, we don’t want them to feel more defeated,” Dr. Minh said.

Experts also emphasize that meditation is not a panacea for all psychological problems. For people with paranoid or psychotic disorders, the mind is no longer alert, meditation is even quite dangerous. “When we practice meditation, we turn inward, develop faith in our experience. If our experience is wrong, we shouldn’t do it,” Mr. Minh analyzed.

In general, meditation helps relieve stress and understand yourself better, so it is useful for everyone, except for the special group of subjects Dr. Minh mentioned. Meditation classes by Minh Dao and Huynh Nguyen also aim for this purpose. For them, meditation gives young people more tools to live peacefully and “touch emotions”.

After Minh Dao’s meditation session, some people shared that they burst into tears when they remembered the upsetting events and connected them to the past. Ngo Minh Ngoc is “awake like a flute”. “Maybe I’m not used to it,” she said. Ngoc will attend one more meditation session, after that it is not certain.

Nguyen Thuy Dung “didly realizes something”, but finds herself calmer. She will continue to sign up for meditation classes, because to her, meditation is an opportunity to sort through chaotic thoughts and heal the spirit.

“Meditation practice is very difficult. Reading books, listening to lectures from others is only meant to lead and explore. Ultimately, each individual must listen to himself, develop faith in his own experiences and then understand from there. more clearly about the nature of meditation,” Dr. Minh concluded.